How to Edit or Remove and Recall Skype Sent Chat Messages

Accidentally send a instant message to a buddy which contains wrong message? Or wrongly send IM which meant for your secret lover to your wife instead? Skype instant messaging program has a feature called ‘edit chats’, which allows sender to modify, edit, recall, delete or remove the messages that has already been sent to the recipients or contacts in a text conversation.

In order to recall and delete a sent message from live Skype text chat message, just right click on the chat message to edit or delete, and then select either Edit Message or Remove Message. If you are not in live conversation, just reopen the chat window or history window with the contact (there is 1 hour caveat though).

Then you will be provided with a chance to edit and modify the sent message, or a confirmation will prompt up to verify the deletion intention. After editing or removing, the posted message will have a extra tag of “Edited” or “Removed” (text message change to “The message has been removed”) to indicate that the message has been changed since initially sent. 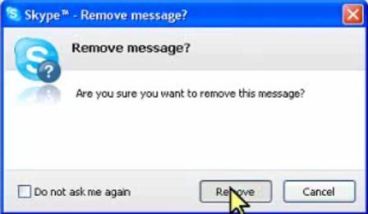 There are a few caveat emptor though. Removed message won’t be completely been deleted and hidden from view. Although the recipients no longer able to see what’s the actual content of the message, but they will still see a post message with text reading as “The host has deleted the message”. Secondly, only recent transmitted and sent message can be modified or recalled, the trick won’t work on messages older than one hour.

And, the hack works in Skype version 3.x. The upcoming Skype 4.0, which currently in beta phase, appears to have strip the feature.