We have been hearing solar powered mobile phone such as the SH002 released by Sharp earlier and if you wonder if there is any mobile accessories that can be paired with it for full solar energy solution, the recent Bluetooth earpiece released by i.Tech could be a good companion. 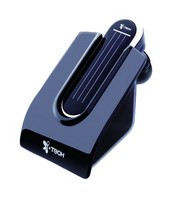 Named as SolarVoice 908, it utilizes solar energy to restore battery charges under the sun that makes the battery life even longer while moving around. Typically, the device can last five hours during normal talk time and impressively, its standby time can reach up to 140 hours after fully charged. There are two options that users can charge the earpiece, either by normal USB charging cradle or charged through solar energy. When being charged through solar energy, there will be a green light being shown on the device. As similar to its other product lines, it is featured with some noise cancellation technology for crystal clear audio quality and furthermore, it can be paired with two mobile phones simultaneously for more practical usage especially for those that have to carry two mobile phones. That is not all, it also supports Bluetooth A2DP to stream music directly for rich multimedia experience while on the move.

Retailed at around $67, the SolarVoice 908 is already available in China market and it is expected to capture some new market share due to its innovative idea of integrating solar cell for energy harnessing as an effort towards greener environment.