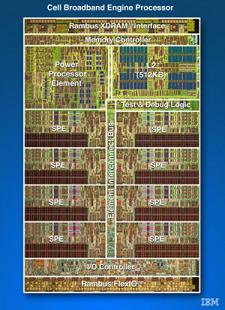 According to analysts, the die shrinks from current 65-nanometer down to 45-nanometer can save a significant 40 percent in terms of power consumption and additional 34 percent on BOM cost. Both this are crucial to compete over its rivals such as Microsoft and Nintendo in the gaming segment. Besides Sony’s PS3, there are other applications like IBM’s Industrial server and Toshiba’s mobile graphics that will able to benefit from the die shrinking process.

IBM will start fabricating new CBE processors beginning of this month. However, no firm date on the actual implementation in end products yet. Anyway, we should expect a cheaper version of PS3 with smaller form factor and better thermal efficiency in near future.