Posted: May 29, 2010/Under: Operating Systems/By: My Digital Life Editorial Team

MUI (Multilingual User Interface) and LIP (Language Interface Pack) are language packs that contains localized resources for the user interface in Windows. All installations of Windows contain at least one MUI language pack (that’s the language version of the Windows installer), in addition to language-neutral binaries and programs. Users of Windows operating system can install additional language packs to switch and change the display language in order to view dialog boxes, menus, wizards, Help topics and other items in different language.

For non-MUI-supported editions of Windows 7 or Vista, user can choose to upgrade directly to Ultimate edition via Windows Anytime Upgrade which available for both Windows 7 and Vista (payment required though) if he or she wants to install multiple languages. For users who want to switch to another language version of Windows permanently, you will need to clean install Windows by using DVD or ISO image of Windows in that particular language with data and settings transferred via Windows Easy Transfer, despite the product key works on any language version. More advanced option is to slipstream the MUI language packs into the Windows installation file and then do a clean install of Windows again. The easiest alternative, there is a hack that allows MUI language packs to be installed even on unsupported edition Windows operating system. The ability to install MUI language packs on all and any editions of Windows was first developed by Chinese hackers when Windows Vista was released, and has since been perfected by a program called Vistalizator. 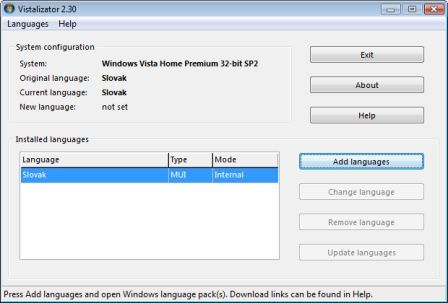 Vistalizator is a tool that able to override (read: hack or crack) the limit of one MUI language on non-Ultimate and non-Enterprise editions of Windows 7 and Windows Vista, effectively allowing users to change display language in any and all Windows editions, suc has Starter, Home Basic, Home Premium and Business/Professional.

In fact Vistalizator is not just a hack to install MUI language packs on unsupported editions of Windows OS, it’s a complete language packs manager for Windows, which allows user to install or uninstall language packs, and change display language directly from within the program.

By default, Vistalizator is using Express mode which uses a “quick and dirty” approach to install new languages and is not able to update all the Windows system catalogs. So the the new languages installed are not recognized by Windows, and thus not updated by Windows Update upon (automatic) installation of some hotfixes or updates that affect language resources, causing some features to not working properly. Internal installation mode, meanwhile, makes use of internal Windows language installer, and should always be used for installation of LIP language packs. More information on the installation mode can be found here.

One major caution though, is that, Windows 7 Activation Technologies now starts to flag system with unsupported edition of Windows 7 OS but installed with MUI language packs as non-genuine.