Intel Atom processor has been getting much traction and you could probably find its solution everywhere from nettop, netbook down to embedded segments such as industrial, Car infotainment, Point-of-Sale and many more. But have you ever wonder that this tiny but yet powerful has been designed to run in robot application? Just recently, Vstone has announced a humanoid robot based on Intel Atom processor running in Linux Operating System. 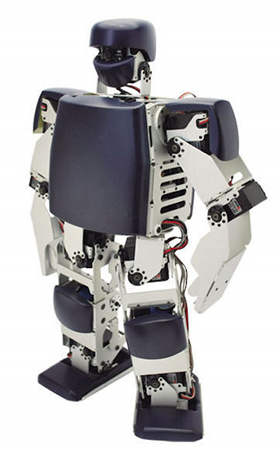 The robot, dubbed as Robovie-PC which measured around 390 X 225 X 115mm and weighted around 2.2kg is featured with a 1.3Megapixel camera, a two-axis gyro, a three-axis accelerometer that enable six degrees of movements with excellent stability while ‘walking’ with two legs. All these features are controlled by a centralized Intel Z5XX Atom based SBC (Single board computer) PICO820 fabricated by Axiomtek some times back. If you recall, PICO820 was used to be the world’s smallest PICO-ITX board that can be fitted in space constraint form factor while offering sufficient expansion ports such as USB ports, wireless LAN and 3G module like conventional mobile PC.

As expected, Robovie-PC is quite costly as compared to conventional Atom solution and priced at $4450 (excluding gripping hands at $210 and additional elbow servos at $140), it may only affordable by research firm, enterprise users or high end hobbyists.