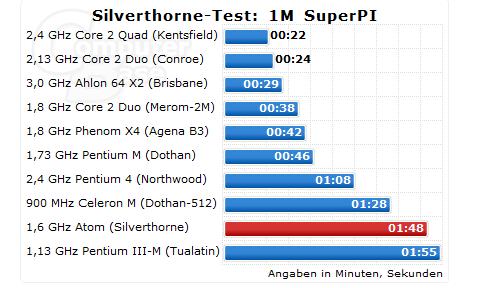 As per the Super PI result published on the website, the Atom processor was tested at 1.6GHz for single threaded application. It was ranked second, from the last, only a bit faster than the old Pentium M (Tualatin) running at 1.13GHz frequency. However, it was not able to compete with Celeron M (Dothan) although the chip was only clocking at 900 MHz frequency.

The performance was not as good as expected by some of the board manufacturers. One of the reasons could be due to the pre production sample that is still not optimized for benchmarking performance. Another reason is the benchmarking test was actually running on single threaded application whereby Atom is famous for its Hyper threading capability that could stand a great advantage when processing parallel threading tasks. In view of these, the data could serve as good reference during early stage but we should expect more better benchmarking results to be available in short future.