Intel Corp is successful with its Atom processor especially in both netbook and embedded markets. And if you wonder what will be the next generation processor that could potentially be targeted for tablet PC, the recent Computex event held in Taipei will have some answer to you. As usual, the giant chipmaker is ready to announce any news that may interest to you especially its concrete roadmap listing down all the upcoming Atom family product lines. And this round of time, an “Oak Trail” platform has just been announced specifically tailored for sleek netbook or tablet PC with tinier form factor with extremely low thermal dissipation. 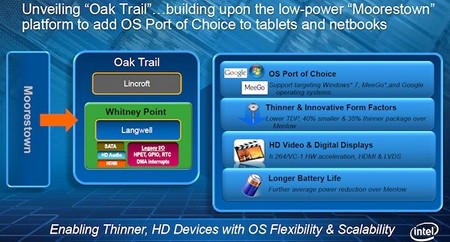 “Oak Trail” is believed to be an official name for Moorestown-W which is the successor for its first generation Z5xx (codenamed Silverthorne processor). Even though there is no specific thermal specification or SKU clock speed being confirmed, but it is expected that the new solution will be at least 40 percent smaller, 35 percent thinner with much lower TDP (Thermal Design Power) as compared to Menlow (Z5XX and US15W) solutions. On the platform itself, it consists of a Lincroft SoC (System on Chip), Langwell IO Hub as well as an additional new block known as Whitney Point. As you may have been familiar with Lincroft and Langwell, Whitney Point is an add-on block that will supply additional HDMI, HD Audio, SATA as well as some legacy block suitable for broader markets.

Meanwhile, the giant chipmaker has also introduced its first dual-core processors, N455 and N475 with each of them clocking at 1.6GHz and 1.83GHz respectively, offering significant performance boost while still maintaining reasonable TDP value. The new Atom processors were demonstrated using a Proof-of-Concept netbook design named as Canoe Lake which is built in a sleek and slim down version as compared to conventional netbook designs.

No pricing information yet, the N455 and N475 are currently in mass production now with actual availability by end of this year, while Oak Trail may have to wait until 2011 before it is ready for consumer market.