Intel Inc has just disclosed a new SoC (System on Chip) as a follow on product after the successful launch of the Intel low power Atom family processors. Named as EP80579, it is a newly designed SoC that is targeted at MID (Mobile Internet Device), in-car infotainment systems, industrial control and other newly explored market segments. 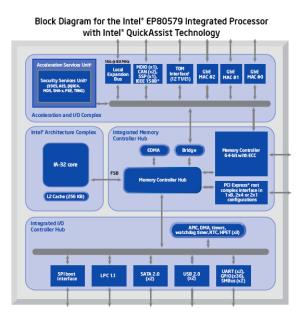 The new SOC will be based on Intel Pentium M processor architecture with some major enhancements. As different from the previous common 3-chips solution that include a processor core, MCH (Memory Controller Hub) and ICH (I/O Hub), Intel has made a major breakthrough by able to integrate all of them into one chip, and yet able to maintain major functions such as security, data path engines acceleration as well as the latest Quick Assist technology. No doubt, by having all these capabilities into single chip, it will reduce the latency of data transfer from core to memory controller, and eventually boost up the whole system performance. Not only that, developers will be able to enjoy more flexibility and simplicity in terms of board and thermal design due to its smaller form factor and lower TDP (Thermal Dissipation Power) as compared to existing solutions. It is forecasted that the SoC solution will be able to reduce the total board footprint up to 45 percent while featuring lower thermal dissipation of up to 34 percent. Most importantly, the new solution will be based on X86 architecture that makes the software porting a simple effort as compared to other ARMS or non X86 archictectures. Hopefully with all these major advantages, developers can shorten the design cycle and get the platform and end products to the market at the earliest possible. Some of the upcoming SoC products that are already in roadmap include Canmore, Sodaville, Moorsetown and more and hopefully they are able to fill up those power sensitive market segments including Apple’s future generation iPhone.