Powerful computers often trade off with higher heat dissipation. As the frequency of the core processors increase, the need of proper cooling system to bring the temperature down is crucial to prevent the whole system lock up and further damage to the CPU. Most of the time, traditional way of cooling system such as huge heatsink and fan may not be suitable due to the space constraint and form factor of the PC architecture. Here it comes the new revolution of cooling mechanism known as Ionic cooling system. 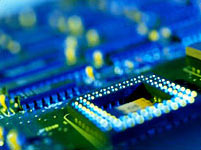 The working mechanism behind the scene is an “ionic engine” embedded in the computer chip which is able to generate positive charged ion molecules, that being attracted or push towards the negatively charged node. When this happens, the surge air flow current will carry the heat air molecules more effectively, and hence cool down the whole system thoroughly. Researchers from Purdue University believe that the new method could increase the cooling rate up to 250 percent in conjunction with the use of traditional fan-based cooling system.

Before it can really go into commercial market, the researchers have to face some stiff challenges on how to miniaturize the device. We should expect some breakthrough in three to five years time before a total transitioning from conventional to this new cooling technology.