Apple has released iOS 4.3.1 Software Update for iPhone 4, iPhone 3Gs, iPod touch (4th generation), iPod touch (3rd generation), iPad and iPad 2, which has been rumored to be released to fix a security vulnerability found on Mobile Safari running on iPhone 4 at Pwn2Own contest by Charlie Miller, which possibly be used as jailbreak exploit. Days ago, Apple has also separately released iOS 4.2.1 for Apple TV (build 8F202). 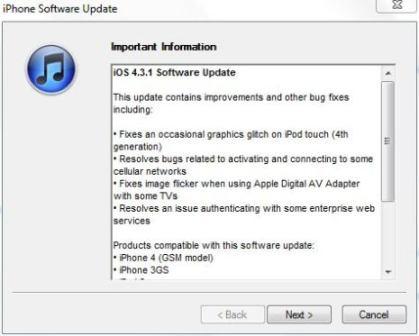 Early report indicates that iOS 4.3.1 may slightly improve battery life, though it still depend on how the gadget is used.

The latest version of firmware OS can be downloaded and updated to the mobile device via iTunes, or in the case of Apple TV, by selecting Update Software in Settings -> General.