A new version of Redsn0w has been released by iPhone Dev Team. Redsn0w 0.9.7 has been updated to support untethered jailbreak of iPhone, iPod touch and iPad running on iOS 4.2.1, which allows the iOS devices to be jailbroken (hacked) permanently (until the next firmware update), without the need to connect to computer for re-jailbreaking on every reboot, as required in tethered jailbreak.

The Redsn0w 0.9.7 is released as a beta version, starting from beta 1 (Redsn0w 0.9.7b1), and has since been updated to Redsn0w 0.9.7 beta 3 (Redsn0w 0.9.7b3) in order to fix various bugs, and extends the fix made in beta2 over to the non-GUI programs too (like the daemons that handle media content), in order to make embedded videos in iTunes work. In Redsn0w 0.9.7 beta 2, user was unable to play video in iTunes Store, nor able to hear the sound without connecting headset. But bug fixes are on top of several fixes include in 0.9.7b2, such as crashes of native apps which includes Task switcher.

Redsn0w 0.9.7 is dubbed as “Backup Plan” by iPhone Dev Team. It requires the 4.2b3 IPSW on a Mac machine, and that Cydia has the phone’s 4.2b3 SHSH hashes to perform the untethered jailbreak hack for iOS 4.2.1. In addition, the developer does not encourage people who relies on the Ultrasn0w carrier unlock to use Redsn0w 0.9.7 Beta. 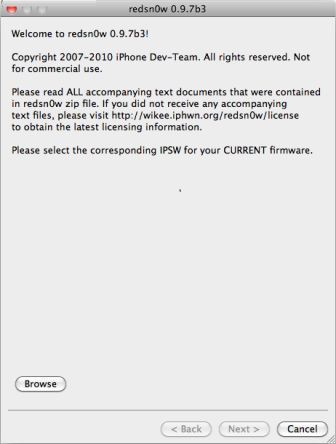 Changelog: redsn0w 0.9.7b4 eliminates that need to to install and run a separate program for the usbmuxd process.

Note that Redsn0w 0.9.7b3 only supports Mac OS X system. iPhone Dev Team promises that a Windows version of Redsn0w will come with 0.9.7 beta 5 fter the release of Redsn0w 0.9.7 beta 4. The beta still has some issues, as some users reported that the usbmuxd process is not working, which will be incorporated usbmuxd into Redsn0w.