If you’re facing above dilemma, Kingsoft Office 2007 is a good alternative and replacement for Microsoft Office productivity suite. Kingsoft Office, which also known as WPS Office in China is an office suite developed by the Chinese software developer named as, obviously, Kingsoft. 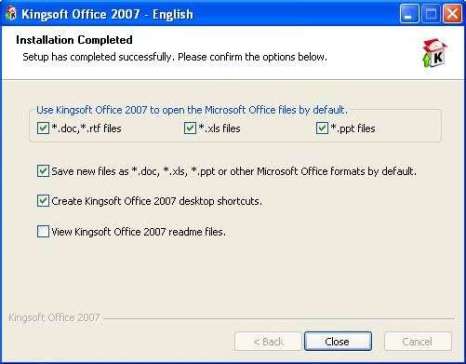 As a result, no training or training is required for users who switch over or migrate from Microsoft Office, dramatically reduced the amount of time required for user to make use of Kingsoft Office 2007 components, Kingsoft Writer, Kingsoft Spreadsheets and Kingsoft Presentation (equivalent to Word, Excel and PowerPoint) productively. And Kingsoft Office is cheap. It costs just between US$28 and $88 and license holder will also get a free six month subscription to anti-virus software Kingsoft Internet Security 2007.

Besides, Kingsoft Office 2007 also features built-in ability to export and save as PDF documents. It’s small and compact download (less than 50 MB) with small memory footprint, making it possible to install and run on older computers, not bloated and has just enough most frequently used functions including support for Microsoft VBA (Visual Basic for Application) program language, while also is Windows Vista-compliant. Last but not least, and most attractive reason, is that Kingsoft Office 2007 Personal Edition is free, and nothing beats freeware.

Kingsoft Office Personal Edition has been released as freeware in China since WPS Office 2005, and currently WPS Office 2007 Personal Chinese Edition is available for free download, but not the English version. The English version of Kingsoft Office setup file downloaded and installed is still officially a trial version with 30 days expiry limitation, although user can send an email to request for KSO free license serial key. Luckily, an English edition of Kingsoft Office 2007 Personal has been distributed in Vietnam by Quang Minh DEC Software.

The free Kingsoft Office Personal 2007 has some limitations though. It doesn’t allow users to open PDF (Acrobat) files, and it’s ads-supported. Meaning that advertisements will appear on the right side of the screen in vertical bar, which cannot be removed or dragged minimize to hidden position. Nonetheless, the user interface of free Kingsoft Office 2007 Personal has been fully translated to English language, despite some ads related content may appear in Vietnamese.