There are many cases where Microsoft Office 2007 cannot be uninstalled properly from the system by using Add and Remove Program or Uninstall Program of Control Panel, normally with setup failed and rolling back changes error message. The cause of the uninstallation problem is vary, such as corrupted or invalid components or remnants from prerelease or trial version of Office 2K7, or invalid registry value after attempting to hack Office 2007 trial version into full version, or when installing different editions of Office multiple times.

WARNING: This tool is meant for users who need to reinstall or who wants to install again Microsoft Office 2007, as without proper uninstallation, Office 2007 does not allow new installation. The utility will delete large amount of registry keys, which may affect system stability upon deletion if Office 2K7 is not installed again. 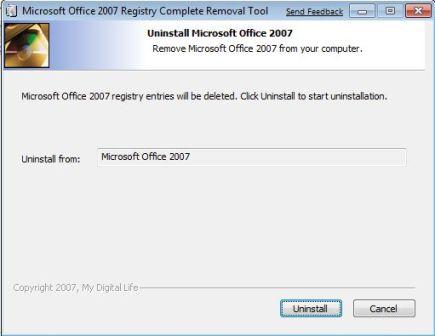 Extract the content of the ZIP archive to a folder, and then run Uninstall.exe. Click on Uninstall to start the uninstallation by registry removal of 2007 Office System suite. Backup your registry before proceeding by running Registry Editor, and then export complete registry hive.