Microsoft is planning to make available download of Microsoft Security Essentials public beta until the cap of 75,000 downloads are reached, or until the final product is available. So, those who interested to try out MSE should grab it fast.

According to Microsoft Security Essentials official homepage, the beta is available only to customers in the United States, Israel (English only), People’s Republic of China (Simplified Chinese only) and Brazil (Brazilian Portuguese only). So if you’re visiting http://www.microsoft.com/security_essentials/ from outside of supported countries, you will be redirect to http://www.microsoft.com/security_essentials/market.aspx instead, with “not available in your country or region” and “you appear to be in a country or region where the Microsoft Security Essentials Beta is unavailable” error messages.

But fear not, whatever you see on MSE web page will ultimately lead you to sign in via a Windows Live ID account, register at Microsoft Connect and then completing a simple MSE survey. User who doesn’t located at USA, Israel, Brazil or China can go to MSE Connect nomination page or MSE beta survey page directly to register for the public beta. If you fail to register too, just download the leaked Microsoft Security Essentials. 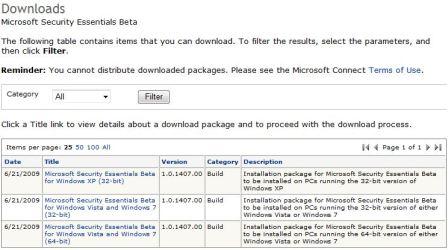