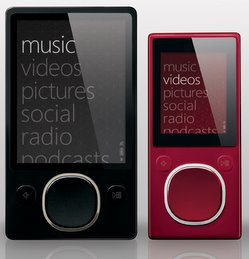 If Apple has its best-selling iPods, Microsoft has its Zunes digital media players. In its latest offering, Microsoft unveiled its second generation of Zunes models. In pink, black, green or red, the mini Flash-memory based Zunes comes with either 4GB or 8GB of storage. Another bigger model sports the mean black look and has an 80GB hard disk with a 3.2 in screen.

The new models come with the Zune Pad which resembles the mouse-button and touchpad of the notebook. These allow music lovers to scroll down and select functions easily. For the computer savvy generation, the Zune Pad is a cool and fast way to skip tracks and play their favourite songs. Besides, the neat and trendy exterior contributed to its high-tech and elegant design. The device can be synchronised with TV shows recorded using Windows Media Centre on Windows Vista PCs.