Apple’s iPad is selling well in Japan market after its recent launch and if you wonder what other similar tablet PC products that could be pushed into local market by its local manufacturers, the recent announcement by its giant electronics maker, NEC will have an answer for you. Named as LifeTouch, it is an ARM Cortex-A8 based tablet PC that will be preinstalled with Android 2.1 as a late comer into this competitive market space. 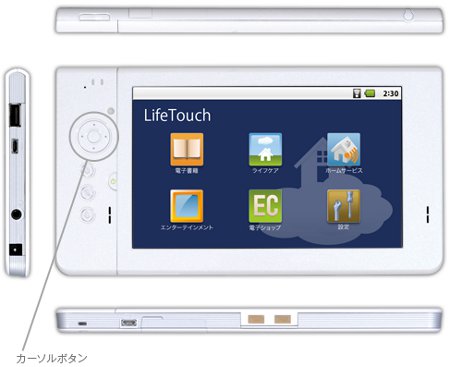 The LifeTouch will be equipped with a seven-inch WVGA touchscreen with maximum resolution capped at 800 x 480 only. Internally, it is powered by an unnamed ARM Cortex-A8 processor that could be from any ARM licensees such as Freescale, Texas Instruments or Samsung. Further backed up with a 256MB RAM and designed with an SDHC slot, it allows easy expandable storage drive for any multimedia files while moving around. As expected, there are wireless LAN module 802.11b/g, Bluetooth and even GPS module, besides the commonly available USB ports (1 Host and 1 Device port) being integrated into a slim 219 x 119 x 13.9mm form factor with merely 400 grams in weight. Other hardware elements include a 3MP built-in camera, accelerometers, magnetic and light sensors. In order to compete against iPad, its battery life is claimed to be able to run for eight hours on single charge and what make it more interesting here is the device will be bundled together with a charging cradle so that it can be positioned nicely even as a digital photo frame or purely a tablet PC in digital home.

No pricing information yet, the LifeTouch is expected to be positioned slightly lower in pricing since it will be commercialized in Japan by October only, which is already few months slower to the market.