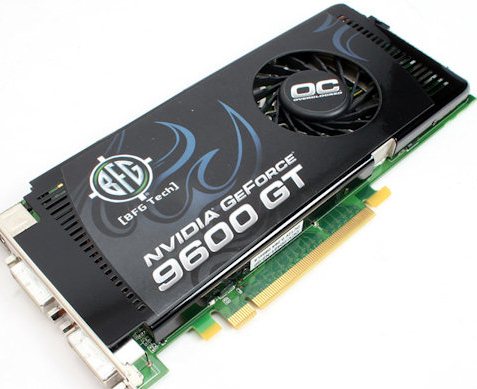 “After going to all the GeForce LANs and seeing the rigs that gamers play on, we wanted to kick off the GeForce 9 with the perfect GPU for gamers,” said Ujesh Desai, general manager of GeForce desktop GPUs at NVIDIA. “The first product to be introduced in the GeForce 9 family gives gamers the horsepower to play cutting-edge DirectX 10 games at a price they will love and can afford.”

“NVIDIA continues to innovate in hardware technology so that game enthusiasts and consumers can fully experience the incredible graphics offerings in Microsoft’s operating systems, including Windows Vista,” said Kevin Unangst, senior global director of Games for Windows, Microsoft. “The new GeForce 9600 GT GPU further extends NVIDIA’s ability to deliver improved DirectX 10 performance on Windows Vista at an affordable price point, so that anyone and everyone can have an amazing gaming experience.”

According to the press release, “A point has been reached in PC gaming where the graphics horsepower requirements to play popular games such as Call of Duty 4 and Unreal Tournament 3 at high-definition resolutions such as 1900×1200 and above, with high-image-quality features enabled, may have outpaced a lot of the installed hardware. Until now, graphics processors capable of delivering playable frame rates at those stressful settings have cost in excess of $400. With the GeForce 9600 GT GPU, immersive gaming with incredible graphics is now within the reach and budget of PC gamers for less than $199.”