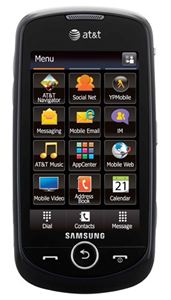 Featured with a 3-inch touchscreen display with 240 x 400 resolutions, the Samsung Solstice II is also equipped with a 2.0-megapixel camera. It boasts with A-GPS with AT&T Navigator and AllSport GPS, supports 3G with HSPA, has built-in 256MB of internal memory, preloaded and downloaded games, video share, My Cast Weather, Star Tweets, Vlingo Speech-to-Text functionality and comes with a battery that provides up to 5 hours of talk time. In addition, it is Bluetooth enabled and supports up to 16GB of microSD card.