Google Chrome has added support for extensions. Much similar to add-ons in Firefox and Internet Explorer or widgets in Opera, Google Chrome extensions allow user to add more features and functionality to the web browser.

According to Google Chrome Help, there are the different types of extensions that are available: 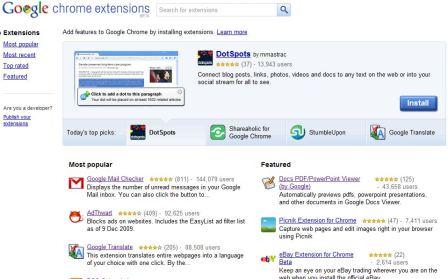 User can browse or search the gallery for extensions. Some categories are available for easy sorting, such as most popular, most recent, top rated and featured extensions. Some extensions that are available, for example, are Google Mail Checker, Google Translate, RSS Subscription Extension, Google Wave Notifier, AdThwart, Docs PDF/PowerPoint Viewer, IE Tab, AdBlock, Google Reader Notifier, Send from Gmail, Google Calender Checker, Google Voice Notifier, Gooogle Translate and more. Unfortunately, some much awaited and requested extensions, such as Google Toolbar and Google Bookmarks are not available yet.

Unlike Firefox, installation of extensions in Google Chrome normally does not require restart of the browser. And it’s possible to disable or remove the extensions installed in Chrome easily.

Extensions, together with web apps and themes are now listed in Chrome Web Store.