Palm has released over-the-air update Palm webOS version 1.0.3 for Palm Pre user on June 19, 2009. The download costs around 13MB of data size. Changes are minimal, but the update brings a number of feature enhancements to the Palm Pre. However, there is no new applications in update 1.0.3.

Palm has posted a full feature changes (aka changelog) to existing application contained in WebOS 1.0.3 on its support site, as shown below. 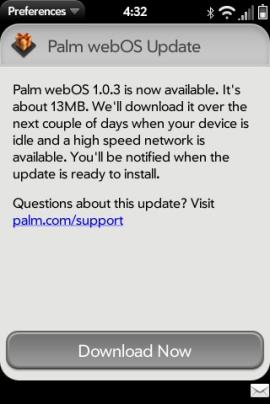