Don’t worry, My Digital Life won’t be raided by Apple for the upcoming iPhone 5 (or may be iPhone 4G) prototype. Nor is the iPhone 5 prototype is leaked. Instead, somebody has proposed a new antenna design for iPhone, which guarantees much better signal reception compared with iPhone 4, and even most other phones.

A Flickr user named petermorgan has designed the next generation iPhone to succeed iPhone 4 with the following antenna design. 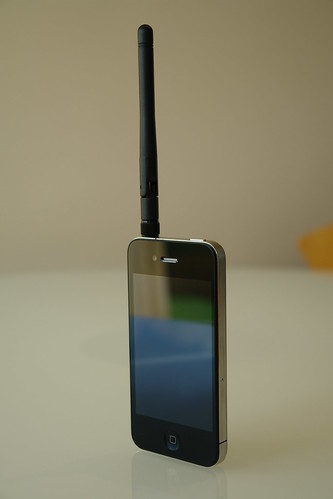 Ugly? Old fashion? Don’t worry too much. With the trend setting ability of iPhone, the marketing capability of Apple, and blind loyalty of Apple fanboys, the new design will surely take root, and set the trend for all future smartphones launched by another other manufacturers.

In case you don’t know, iPhone 4 has an external antenna, which has a weak spot in the lower-left corner of the frame, marked by the black line in the frame. The antenna suffers from attenuation when been covered by hand, or worse, signal loss when the insulation gap between antennas are bridge with human’s skin.

Best of all, no more grip of death, no single point of failure and no more dropped calls on iPhone 4. And no free Bumper case required.