With the ever increasing popularity for MMO gaming, Razer has expanded its MMO gaming product portfolio with the new high-performance Razer Anansi gaming keyboard, which the company claims as the world’s first MMO gaming keyboard crafted specially for hardcore MMO gamers. Razer Anansi that comes equipped with seven ergonomic modifier thumb keys and various advanced MMO functions is capable of customizing the key backlighting from more than 16 million colors, aiming to bring your MMO gameplay experience to a next level. 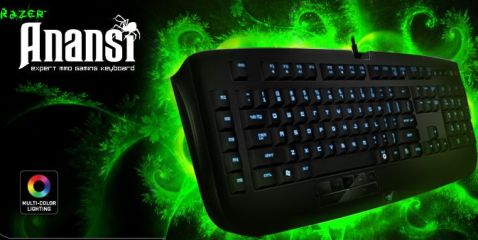 “The Razer Anansi gaming keyboard is the new weapon of choice for MMO gamers,” commented Robert “RazerGuy” Krakoff, president for Razer USA. “Let’s face it, the regular keyboard that came with your PC was designed and built for typing, not for MMO gaming. With its revolutionary seven thumb modifier keys, every key combination that you had before is now multiplied by seven times. The Razer Anansi allows you to use every spell, ability or custom macro in your arsenal — both instantly and in complete comfort.”