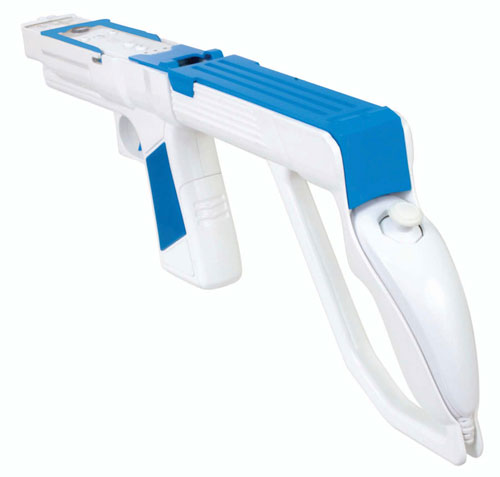 Playing high-tech game without a proper controller lacks kick or satisfaction. The right controller in hand can make a bit difference to fans of video games. To add excitement and thrill to shooting games involving guns such as Target:Terror, Ghost Squad, etc, dreamGEAR has created the most advanced and versatile Light Gun, Rumble Blaster, for shooting enthusiasts particularly Nintendo fans. Rumble Blaster allows users to customize it to match their gaming needs. Gamers can use the blaster separately as two pistols, one for each hand, or combine it into a single handed ultimate rifle.

Rumble Blaster is compatible with any games that involve running or chasing and shooting down the enemy. The LED light and rumbling sounds help to make your gaming experience a truly fantastic one. A summary of the package features is listed below:
• Break-away design for 3 types of game play
• Built-In RUMBLE effect for extreme realism
• Dual triggers for maximum functionality and control
• LED Blast illumination effects
• Rubberized grip for added comfort