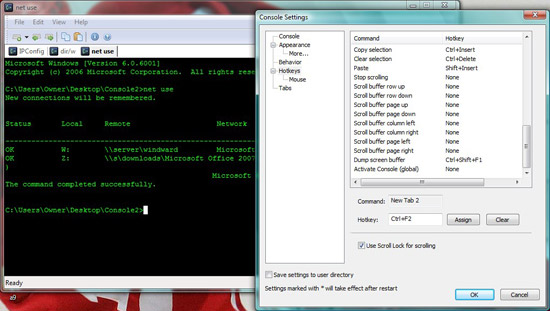 Console is a freeware that enables command prompt to be opened under new tabs instead of running as separate windows. With the tab feature, you will never get windows taskbar crowded with too many opened command prompt when running simultaneously. Alternatively, you may try TrayIt! to keep running applications under system tray in order to avoid congestion and confusion caused by too many opened applications. On top of this, it lets you customize font color, change the cursor to different styles, set transparency levels for both active and non active windows and many more. To make your life easier when using command prompt, Console also provides a number of command hotkeys such as Ctrl+Insert to copy the text, Shift+Insert to paste the text, Crtl+F1 to open command prompt in a new tab and etc. If you don’t like the default hotkeys which come together with the installation package, there is an option for you to change the hotkey to the one that is preferred by you.

Console doesn’t requires any installation and it is portable to be run from anywhere such as USB drive. It can be run on windows 2000 and newer versions and if you feel this is useful, just download it at here.