Send and Receive MMS on iPhone with SwirlyMMS Native App

MMS (Multimedia Messaging Service) is the enhanced sibling of SMS (Short Messaging Service, which more commonly known as simply text message) which allows longer length of message with attached multimedia contents such as image, photo, audio and rich text to be transmitted and delivered on the mobile carrier network. Unfortunately, iPhone and iPhone 3G are lacking such picture messaging capability on its phone.

Two developers in UK has create MMS Photo Messaging app for UK O2’s iPhone users, but iPhone owners on other countries or cellular carriers are not out of luck. Other than using email to sent to free email to SMS gateway provided by service providers, another native iPhone app, SwirlyMMS is also available to support sending and receiving of MMS on iPhone. 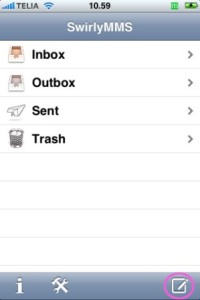 SwirlyMMS is a native MMS application for the iPhone and is the de-facto standard for sending and receiving MMS on the iPhone to and from any cell phone, just like when using any other brands and types of cellphone. Features of SwirlyMMS include:

Unfortunately, SwirlyMMS is not available on Apple AppStore. That means if you want to download, install and use Swirly MMS on your iPhone, you have to jailbreak the iPhone with the like of QuickPwn or PwnageTool. Both jailbroken 2G and 3G iPhones are supported.

SwirlyMMS can be downlaoded and installed via Cydia installer Featured Packages, the installation program that comes with the jailbreak. After installing, user just need to configure the MMS settings, and the iPhone is set ready to send and receive MMS.

SwirlyMMS is a commercial application though, but costs of purchase is only $8. 14 days trial is available. All demo license and full unlock license can be acquired directly from SwirlyMMS program interface. The guide to download, install, configure and buy SwirlyMMS is available at swirlyspace.com.