Send Free Text Messages Around The World With HeyWire 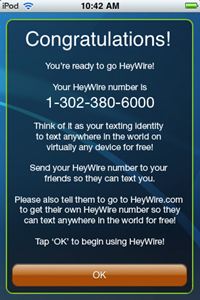 Key features of the HeyWire includes:

The Heywire application for iPad, iPod Touch and iPhone is available for free download from App Store. However, the PC or MAC user also can register from here to access the web version of HeyWire for free text messaging.