Subtitle is textual versions of the dialog in movies, films and TV shows that usually displayed at the bottom of the screen. The subtitle is useful when viewing video in foreign language, where the subtitle can display translation caption. Subtitle can be also a written rendering of the dialog in the same language, with or without added information to help viewers, especially the deaf, hearing impaired person, and who have accent recognition problem to better understand the spoken language.

In order to display and show subtitle in Windows Media Player, Windows Media Center or any other DirectShow player such as Media Player Classic, Zoom Player and etc, Windows users can download and install DirectVobSub, which was previously known as VSFilter or simply VobSub.

DirectVobSub is a software add-on for Microsoft Windows (a DirectShow subtitle filter) that is able to read external subtitle files and render subtitles along with digital video playback. DirectVobSub integrates automaticlaly with any DirectShow-based media player for automatic playback of subtitle, and can also be used as a plugin for AviSynth and VirtualDub by using the VSFilter.dll file to rename as VSFilter.vdf. DirectVobSub is part of Guliverkli2 project. 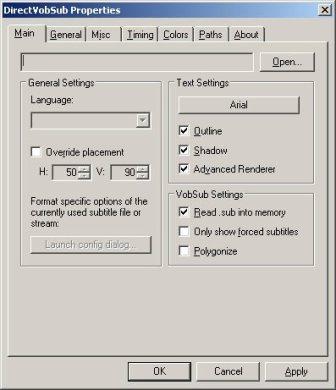 The current version of DirectVobSub is 2.39, and DirectVobSub subtitle filter for DirectShow-based player can be downloaded from sourceforge.net or through direct download links to VSFilter_20090624.zip.

The official DirectVobSub filter from developer is in 32-bit (x64) only. There is also 64-bit (x64) version of DirectVobSub, for use with 64-bit media player.

A new version of DirectVobSub 2.40 is also available for download.

To turn on and enable the subtitle when watching movies, films, TV programs or any other videos in Windows Media Player, several steps have to be performed, after installing the DirectVobSub (VSFilter).

Firstly, rename the subtitle file to have the same file name as the video file, excluding the file extension. See the example below for correct video and subtitle file name.

And make sure that both video and subtitle files are located inside the same folder.

Then, play the video with any DirectShow-based software video player, and the subtitle should automatically appear on the screen. A green arrow icon will appear at notification area (system tray) when DirectVobSub successfully locate and load the subtitle.