Previously we mentioned about Shuttle Barebone XS35 that is planned to be released by second half of 2010, now the machine is finally ready to be shipped to consumer space. Being powered by Intel dual-core Atom D510 coupled with Nvidia Ion 2, there will be a few models targeted for entry and mainstream market with slightly different specification configurations. 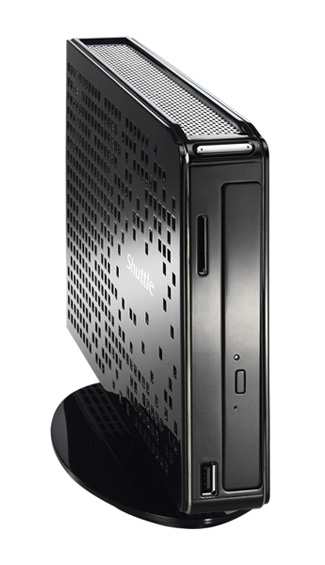 While all the models are powered by dual-core Atom D510, Its entry level XS35 will be equipped with 1GB memory RAM with no optical drive support, whereas its higher end model XS35 media edition is supported by 2GB memory RAM and 230GB hard disk storage. If you think this is not powerful enough, its mainstream XS35GT provides additional accessories upgrade with 2GB of RAM, 500GB hard disk drive as well as a DVD/Blu-Ray optical combo. Other specifications include five USB 2.0 host ports, Ethernet ports, VGA output, 802.11b/g/n wireless technologies as well as Nvidia Ion discrete graphic components across all platforms for greater multimedia experience.

Measured at 9.9 x 6.4 x 1.5 inches and weighted around eight pounds, the basic XS350 is already available now at $240. Meanwhile, the media and HD edition are priced at $290 and $380 respectively targeted for all level of end users.