As technology advances, image has largely replaced reality in many aspects of communication. But the image is increasingly being made to seem more real with 3D technology. Japan’s National Institute of Information and Communications Technology (NICT) has unveiled a mini cube which can lend images an awesome 3D effect. The gCubik which previously only displayed images on three interfaces has now been improved to provide even more fascinating effects. 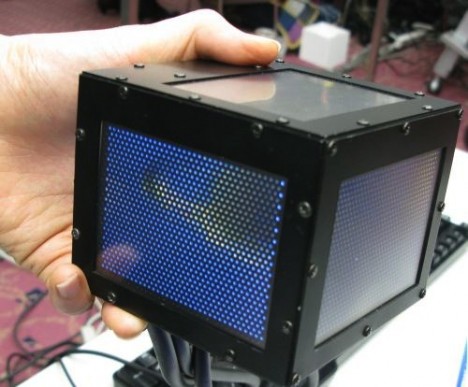 gCubik exploits the Integral Photography (IP) technology to enable 3D images to be viewed with the naked eye rather than through sophisticated 3D glasses. While most 3D displays project the image outside the device, gCubik captures the image inside the cube and enables the viewer to view it as though the object is inside the box.

The latest gCubik release enables viewers to view the image from all six sides of the cube and whichever side they turn the cube, the corresponding side of the 3D image will be displayed. This is possible because 3.5 inch VGA (640 x 480 pixel) LCD panels have been installed on all six sides of the cube. The 3D image on each panel changes every 6.7 degrees making the image appear smooth even when viewed from different angles.

In addition, the 3D image is given some form of animation through the resistive touch panels, 6-axis acceleration sensors and speakers which have been added to the new gCubik. The ultimate aim is for the 3D image to interact with its viewer via movement and sound when shaken or touched by the user. This would have wide commercial implications as a photo placed inside the cube will move and talk to its owner while a gCubik integrated video game could possibly create a super realistic gaming experience for gamers. For now, the image inside the cube turns slightly when the display panel is touched with the fingertips. NICT is also looking into improving the display resolution of the gCubik.