(aff), which allows user to stream audio and video content from Internet or local network to a HD TV via Wi-Fi, is one of the most affordable, easy to use and popular media streaming device. However, the ability of to cast the media content is dependent on the availability of Chromecast-enabled web apps and mobile apps, or through Google Cast extension that enables the tab casting feature to project a tab or screen to the high-definition television.

As the result, streaming or casting to Chromecast is not as easy as perceived, as not all the entertainment consumption or media watching that you prefer are on supported apps such as YouTube, Netflix, Hulu, vevo, Viki, Pandora and Google Play.

One of the missing piece of Chromecast is the ability to stream video or music currently played on the computer itself, be it Windows PC, Mac OS X or Linux. For example, you can’t simply play a movie or video in Windows Media Player, and attempt to cast the screen to Chromecast. Instead, you will need to make use of third-party Chrome-enabled apps, especially mobile apps, such as AllCast, Avia, Plex, Media Browser or RealPlayer Cloud.

If you want to cast or stream video, movie and other multimedia files in local storage to Chromecast, using the ‘tab casting’ feature provided by Google Cast extension for Chrome is nifty. 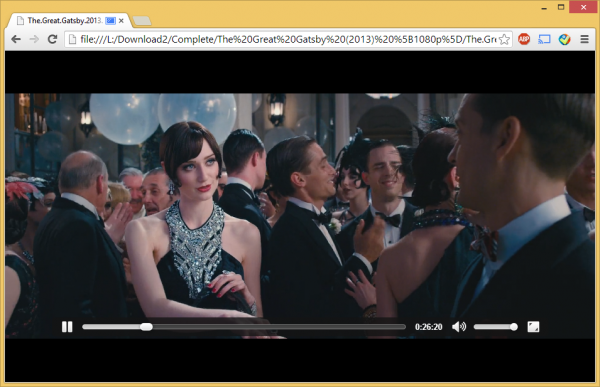 Unknown to many, Chrome web browser is also a media player for many type of audio and video files. Chrome has the following built-in codecs and containers to play the following file formats out of the box:

If you have a support media file, here’s how to play the media on your HDTV by casting it through Chromecast:

As shown above, Chrome does not support many other popular file formats, notably AVI, WMV, ASF and MKV files. To workaround this issue, you can several one of the extensions below, which allows additional audio or video files to be played inside Chrome browse, and hence able to the cast to HDTV.

Do remember to check whether the plugins are enabled at chrome:plugins URL. 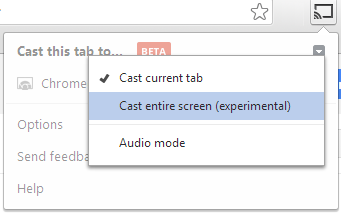 The last alternative, if all else failed, is to use the experimental feature of Google Cast, that’s entire screen cast, which projects the whole desktop to TV. To enable this feature, click on Google Cast icon, and then click on the down arrow. Select cast entire screen (experimental).