Engineers at the Georgia Institute of Technology has invented a tongue device which can help disabled people to control a wheelchair, operate a computer or interact with the external environments by using only the tip of their tongue. The invention of this tiny device brings another hope to individual with severe disabilities to be more independent. 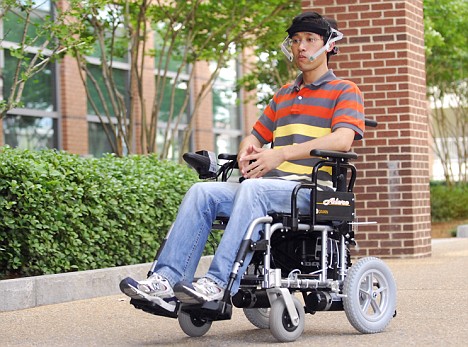 The new tongue device, namely Tongue Drive System, is a small magnet at the size of a grain of rice. It will be implanted or pierced to users’ tongue. Users can direct a cursor in a computer or wheelchair by moving their tongues. According to the inventor, the tongue was chosen to operate the entire system is because unlike hands and feet, which are controlled by the brain through the spinal cord, the tongue is directly connected to the brain by a cranial nerve that generally escapes damage in severe spinal cord injuries or neuromuscular diseases.

When the users move their tongues, the movement of the magnetic tracer on the tongues will be detected by an array of magnetic field sensors mounted on a headset outside the mouth or on an orthodontic brace inside the mouth. The sensor output signals are wirelessly transmitted to a portable computer, which can be carried on the user’s clothing or wheelchair. The sensor output signals are processed to determine the relative motion of the magnet with respect to the array of sensors in real-time. This information is then used to control the movements of a cursor on the computer screen or to substitute for the joystick function in a powered wheelchair.

With this new assistive invention, those who suffer with severe disabilities such as those with high-level spinal cord injuries can live more independent and productive. They can have better control over external environments and communicate better with others.