The mind is the most mysterious and powerful part of our body which can inflict awesome power and influences beyond our expectations. That is the reason many scientists, researchers, etc have been constantly striving to develop devices or gadgets controlled by mind power. The Japanese car maker, Toyota, via its Toyota Collaboration Center has collaborated with researchers in Japan to develop a unique wheelchair which can be controlled by the mind. 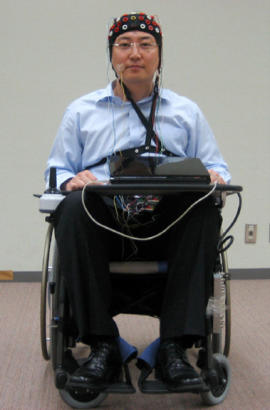 This innovative wheelchair from Toyota can interact with users’ thoughts via a Brain Machine Interface (BMI). The working concept behind the device is the brain wave-detecting technology or electroencephalography (EEG). EEG is not a brand new technology but it has been developed and applied in various areas by researchers. With this technology, the sensors will detect human’s brain waves and the wave patterns will be analyzed and translated by a computer and converted into instructions/messages for activities to be carried out.

Even though EEG technology has existed for quite some time, scientists still have difficulty controlling it and achieving shorter response time from brain waves for analysis. The new Toyota mind-controlled wheelchair somehow can be claimed to be a breakthrough as the wheelchair is able to respond within 125 milliseconds. In other words, users on the wheelchair can use their mind to control the device’s movement almost instantly. Toyota also claimed the new invention can achieve up to 95% accuracy.

If the mind controlled wheelchair is successfully developed, it will be an amazing device to assist in the rehabilitation of patients who are paralyzed or unable to control muscle movement and stroke sufferers.