Need a reason to pull your records out of storage? A company called ION has created a USB turntable called the iTTUSB. The company claims that this is the world’s first USB turntable. 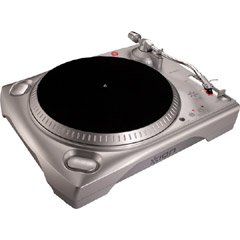 The iTTUSB allows you to convert your old vinyl collection directly to CD or MP3 with the included recording software (Mac/PC) and is a must have for people who don’t want to deal with clumsy adapters or mismatched audio formats.

The iTTUSB comes with Audacity, a recording application that works with both PCs and Macs, as well a trial version of Bias Soundsoap 2 to clean and restore vinyl recordings.

As an alternative, the turntable also works with any other software that supports USB audio input sound cards. Once connected, the turntable transfers both 33-1/3 rpm albums and 45 rpm singles to digital formats in mere minutes.

The iTTUSB is great for all those obscure releases that never made it to CD. More info on the iTTUSB: