Via Nano E-Series Processors with SSE4, VT and PadLock Technology for Embedded Markets

Previously we mentioned about Via Nano 3000 that boasts with 2GHz with SSE4 and VT (Virtualization Technology), now seems that the fabless processor maker has came out with a new refresh series with intention to compete against Intel famous Atom processor especially in embedded market. Named as Nano E-series, there are SKUs available ranging from minimum of 800MHz with up to maximum of running clock at 1.8GHz to differentiate and fit into various applications. 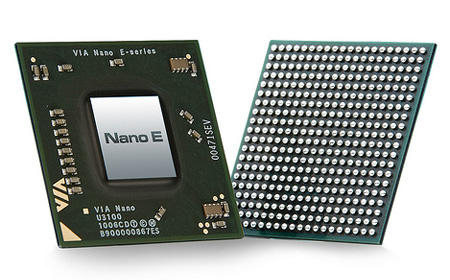 Designed in the same package size as previous L-series and U-series in nanoBGA2 at 21 x 21mm form factor, the new E-series will be pin-compatible with existing Nano processors and even older generation C7 or Eden processors to simplify design works required by system builders. And as feature enhancements, the new E-series is expected to get performance boost with SSE4 instruction set extensions as well as VT (Virtualization Technology) support, not to mention about the clock frequency increase as compared to previous with most of the competitors’ products like Intel Atom processors that stay at maximum of 1.6GHz due to TDP (Thermal Design Power) and heat dissipation concern. Most importantly, they are designed to be able to utilize its own integrated media system such as VX855, that is best known for compelling graphics and video decode performance as compared to Intel relatively older 945GSE chipset. Some other great enhancements include the PadLock AES (Advanced Encryption Standard) for extra security protection as well as compatibility with 64-bit computing that will definitely able to leverage on when Windows Embedded Standard 7 is available in short future.

No pricing availability yet, Via Nano E-series processors are already in sampling stage now for some early customers and is expected to give Atom processor a hit when it is available in mass production soon.