Previously we mentioned about Artigo Pico-ITX based builder kit that was based on Via C7 processor, now seems that the fabless company has upgraded to a newer board version, Artigo A1100 with a much powerful Via’s Nano processor targeted for embedded and space constraint PC applications. 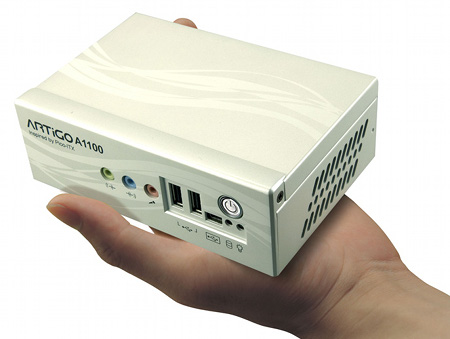 In similar Pico-ITX form factor, the new tiny PC is a refreshed version after its first Artigo design back to 2007. Measured at slightly smaller size of 5.7 x 3.9 x 2.0-inches, it replaces the C7 processor with a tinier but yet much powerful processor 64-bit architecture Nano U2500 processor clocking at maximum of 1.2GHz with intention to compete against famous Intel Atom processor series in today’s entry level market. And when paired with its VX855 media chip, it provides necessary interfaces such as USB 2.0, Ethernet, IDE, SATA, as well as VGA and HDMI video output ports suitable for usage models that require dual independent displays, while still maintaining sufficient room for 2.5-inch hard disk drive as well as upgradable 2GB DDR2 memory module.

Surprisingly, the new barebone configuration (without RAM memory and storage drive) costs merely $243, which is much lower than previous C7-based Artigo kit t $300 three years back. Artigo A1100 is already available now and as expected, it may be preloaded with Linux flavors and even Windows Operating Systems since it is X86 based architecture (without limitation like ARM based architecture) depending on system builders and end users’ requirements.