Recently we talked about NTC100-LX800, a Nano ITX based PC released by Advansus. It is a small form factor PC powered by AMD Geode for Factory Automation application. Now VIA is also developing a Pico ITX (even smaller form factor) based PC, known as ARTiGO targeted for MID (Mobile Internet Device) or UMPC (Ultra Mobile PC) market segments. 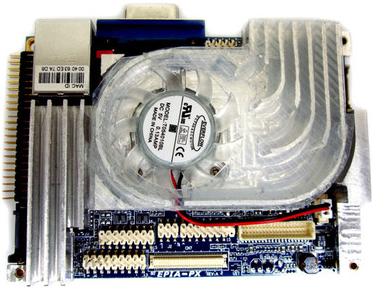 Both Nano and Pico ITX form factor are first being proposed by VIA Technologies for embedded market, and they have been adopted widely by other manufacturers for various kinds of products. Unlike NTC100-LX800 that powered by AMD Geode LX800, ARTiGO is powered by VIA C7 processor running at 1GHz, doubling current speed offered by its competitor. Paired with VIA VX700 IGP chipset, it supports four USB 2.0 host ports, one 10/100 Mbps Ethernet, built in audio High Definition port, one VGA port for display and DDR2 SODIMM memory up to 1GB capacity. Its dimension, measured only at 15 cm X 11cm X 4.5cm has greater advantage over Nano ITX in terms of form factor. However, more stringent design rules have to be applied and taken care during development stage.

In terms of OS (Operating System), it can be enabled with Windows 2000/XP, Win CE, Windows XPe (embedded) and even Linux for developers with different expertise.