If you’re still waiting faithfully to download and install Windows 8.1 Update from legitimate source, i.e. Microsoft, the wait is finally over. As scheduled on April 8th, 2014, Microsoft has published the Windows 8 Update as KB2919355 on Microsoft Download Center, and also distributed the updates through Windows Update. Windows Update is made available Windows 8.1 Update on 10am PST (Pacific Time), which is the time the Patch Tuesday normally rolled out.

Windows 8.1 Update can be downloaded from the Microsoft Download Center at the following URL: 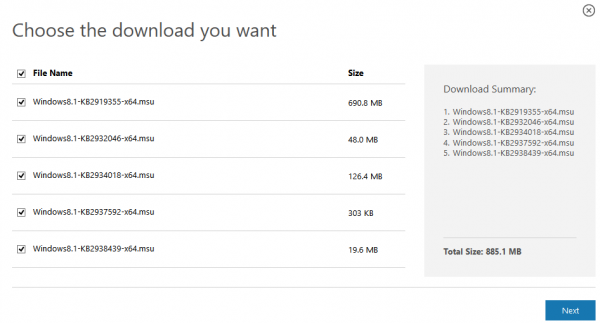 There are multiple files available for this download, and you will be prompted to select the files you need when you click on the “Download” button. The files available are, together with their direct download links:

If you’re applying the updates through Windows Update, you won’t see the following individual updates. Instead, everything will be combined and offered as Windows 8.1 Update (KB2919355). The file size to download should be corresponding to the total file size of all updates below, or those that your system is still missing.

One thing of note is that, the official Windows 8.1 Update also has slight differences from the Windows 8.1 Update released via MSDN/TechNet. Most prominently is that the KB2949621-v2 has been removed from the package, and superseded by KB2934018 which supposed to include everything from KB2949621. If you’ve installed KB2949621-v2, you can uninstall it and then install KB2934018. As the result, Windows 8.1 with Update ISOs previously leaked from MSDN/TechNet may also have been updated to newer version by Microsoft to reflect the changes.