Xbox Live online multi-player gaming and digital entertainment service first introduced on Xbox 360 game console are one of the few markets that Microsoft really succeeds in. Thus it’s kind of expected that Microsoft wants to bring the online gaming and entertainment experience to all kind of devices and platforms. The long term initiative is called Live Anywhere where among targeted platform is Zune, Windows OS, and Windows Mobile phone, in addition to Xbox.

Microsoft already integrates Xbox Live into Windows Phone 7 as one of native feature, and will also integrate Xbox Live natively into Windows 8, as one of new features of Windows 8. In fact, Windows XP, Windows Vista and Windows 7 already has an online gaming platform based on Xbox Live called Games for Windows – Live, where all users also get to download Tinker PC game for free. But Games for Windows – Live is not come pre-installed on Windows, nor tightly integrate with Windows, and it’s mainly tilted towards gaming. In Windows 8, Xbox Live will be tightly integrated, and expands beyond gaming with digital content delivery to make Xbox Live the core entertainment service.

According to Mike Delman, vice president of global marketing at Microsoft’s Interactive Entertainment Business group, when he was interviewed by Seattle Times, “Xbox Live will be built into the PC. It will be the service where you get your entertainment. We were talking about it — you will not just see consoles and handhelds at this show next year, this show’s going to morph into other devices.” With the availability of Live TV and VOD (video-on-demand) from major cable networks and service providers, Xbox Live is gearing up to fight off increasing competitive market in providing entertainment services, chief among all, the iOS ecosystem of iPhone, iPad, iPod touch and Mac OS X with iCloud and cloud-based iTunes offerings.

Mike Delman also gave some clue on how Xbox Live services and content be part of Windows 8:

There will be a lot of similarities in design and service philosophy. Whether it’s us or Apple or anybody else, people want to be able to navigate through multiple devices in a certain ecosystem very seamlessly so we’re committed to that.

And the Xbox Live will also go the way of “buy one play it anywhere”. Xbox Live has already built based on cloud service concept, and with Xbox Live been integrated more and more platforms and devices, Microsoft promises Xbox Live will be the pervasive cloud media service across devices, that works with Windows PC as well as Windows Phone and Xbox. 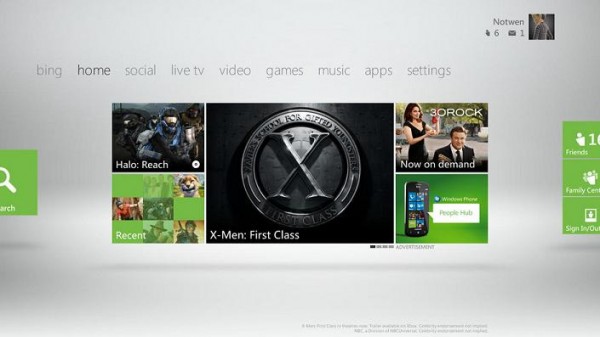 Microsoft has already prepared Xbox Live to elegantly blending into the new Windows 8 and Windows Phone 7 tile-based user interface. During E3 keynote address, Microsoft revealed that Xbox Live will have a new Dashboard design, which is also based on the “live tile” on immersive Metro UI.