Wireless Printing, File Sharing, and Automatic File Back Up Via Belkin Home Base

As there is a new trend for more and more people to install wireless network in their homes, a home solution package offered by Belkin, namely Home Base is something that end users could be really interested in. Belkin’s Home Base is a little square box which offers home users an easier and more convenient way to share resources in an existing wireless network. The little box features four USB 2.0 sockets and an Ethernet jack. Users can easily connect the device to a home router, a printer and hard drives. With Home Base, all the wireless networked PCs can send printing to a common printer connected to the device from anywhere within the home.

Through an external hard drive attached to the Belkin’s Home Base, family members can share and view music, photos, videos, etc amongst themselves. Users who worry about file or data loss due to some unexpected technical faults can also make use of this device to do periodical backup. Another key feature of Home Base is the automatic wireless backup of the connected computers periodically. With the automatic sharing feature, users can get their favorite photos uploaded to Flickr or Picasa automatically. 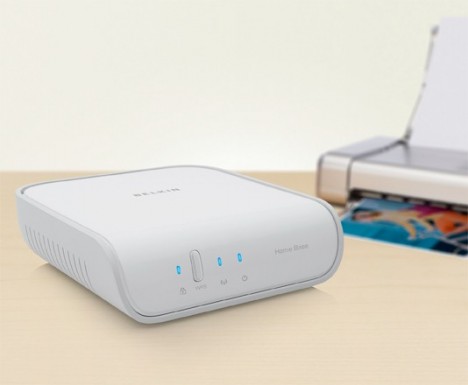