With the successful hacking of Sony PS3, despite only for PS3 which owner decides not to upgrade to firmware system software version 3.42, the PS3 homebrew scene has finally taking off, with the FTP server for PS3 been made available, albeit it’s a quickly developed version, which means it’s still a buggy code. 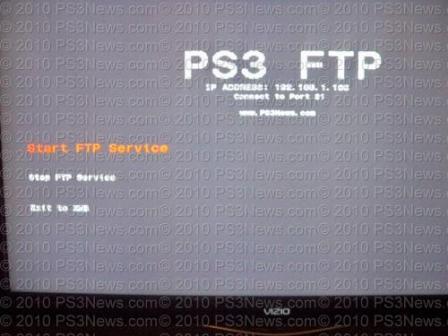 To install the FTP Server on PS3, the PS3 has to be “hacked” to enable execution of unsigned code first (i.e. with PSFreedom, PSGroove or PSJailbreak). Then, just copy the downloaded “PS3-FTP-Server.pkg to a removable USB mass storage device such as USB flash drive, connect the device to PS3, and use the “Install Package Files” from the hacked PS3′s XMB to install the FTP server. Start the FTP service on PS3 once installed.

To access and use the FTP server, launch a FTP client such as FileZilla, and connect to the PS3’s IP address (shown on screen) at port 21. By default, the FTP server has the user name of “FTPD12345” (without quotes) and any password can be used to sign in. In some FTP client, user can only use one connection, and disable the PASV support for it to work.

The FTP server has some limitations though:

As shown in limitations of the FTP Server for PS3 above, some common and popular FTP commands such as rename are not supported. In addition, some of the flash contents are writable, which mean can be deleted, overwritten, replaced, or removed accidentally, causing irreversible data loss.

FTP Server for PS3 is developed by CJPC.