The Windows 8 M1 Build 7850 was compiled on September 2010, way earlier than the final version of IE9 (Internet Explorer 9) which was only finalized on March 2011. As the result, the IE web browser that comes with Windows 8 Build 7850 is of IE9 Beta version, which long past its best by date.

Unfortunately, attempt to simply download the official setup installer of IE9 final RTM version and install onto Windows 8 Build 7850 will fail as the IE9 installation will check and verify that operating system as it’s only supported on Windows Vista and Windows 7.

Here’s the trick on how to install IE9 final RTM to upgrade IE9 Beta on Windows 8 Build 7850. 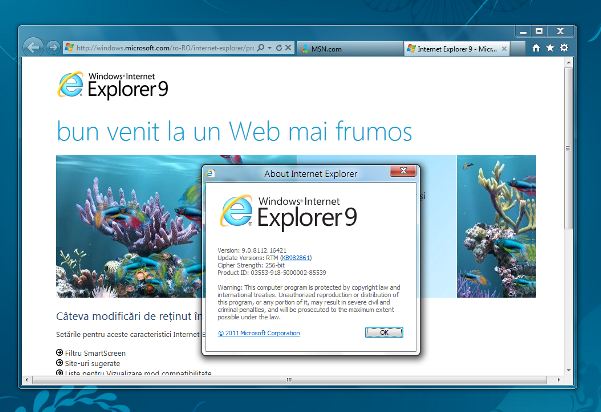 The trick above will work on any language version of IE9 too. So it works as an workaround to change the language of IE9 to local language while upgrading from beta to RTM.

To install non-English version of IE9, for example, German, Spanish, French, Italian, Japanese, Chiense, Korean, Arab and etc, just change the name of the setup installer and the name of the language pack according.

For example, here’s the commands to use to upgrade and install Simplified Chinese version of IE9 RTW, with the language code (which to be changed for other language) highlighted: