The next iteration of Internet Explorer web browser, IE9 (Internet Explorer 9), has finally been officially released by Microsoft after its public beta and RC. The RTW (Release to Web) version of IE9 is equivalent to final and stable RTM version, and it has the build version number of 9.00.8112.16421.110308-0330, indicating it’s compiled, finalized and signed off on March 8, 2011. 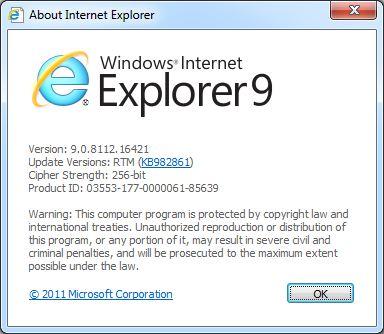 Microsoft is making available downloads of IE9 setup installers from 9 PM of March 14th, 2011 Pacific Time to coincide with the IE9 Beauty of the Web launch party at SXSW. IE9 adds many major features and includes many enhancements in order to compete in the competitive web browser market. New features that make its appearance in IE9 include:

People who is intending to install IE9 should take note the following items:

The final stable version of IE9 can be downloaded from official IE site, beautyoftheweb.com or Microsoft Download Center. The web pages appears not been updated yet, but the official direct download links to the setup installers of IE9 final stable RTW/RTM version have been leaked. Just use the following direct download links to download full version standalone offline setup installers of IE9.

All other languages can be downloaded from microsoft.com.

Tips and Tricks on IE9