Windows Internet Explorer 9 (IE9), the next version of IE web browser to replace IE8 which is included in every Windows PC shipped worldwide, has been previewed by Microsoft. After showcasing IE9 at MIX10 conference, Microsoft has released Internet Explorer 9 Platform Preview, a “partial” web browser intended to give Web developers an early look at the Web platform technology coming in IE9.

As IE9 Platform Preview is not a full web browser, thus it lacks many features and controls user commonly used in a browser. For example, IE9 Platform Preview doesn’t even have a back or forward button, address bar (to open a web page, use Page > Open or press Ctrl-O instead) and information bar (also known as gold bar, effectively making downloading of files harder). It also cannot registers as the system default browser, so when clicking on any link that opens in new window, the web page will open in default web browser. More information on limitations and known issues of IE9 Platform Preview is available in the release notes. 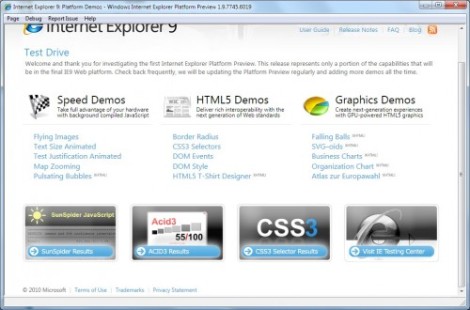 Internet Explorer 9 is expected to have better support for many web standards such as HTML5, CSS3, DOM and SVG, and included support for GPU-accelerated graphics rendering for HTML5 video via DirectX technology, take advantage of GPU hardware acceleration for web pages rendering, and enhance JavaScript engine to support modern hardware.

The first release of Internet Explorer 9 Platform Preview is version 1.9.7.7.45.6019, and Microsoft intends to release new version of Platform Preview releases every eight weeks (two months), until IE9 Beta, which is then a full browser is officially.

You can force the Platform Preview into different document modes. To do this, click the Debug menu and select one of the Document Modes. You can also press Alt plus the numbers 5, 7, 8, or 9 to select IE5, IE7, IE8, and IE9 document modes respectively (for example, Alt + 7 for IE7). You can press Alt + 0 at any time to reset the document mode to the page default. The current document mode is shown for the currently viewed page at the left of the status bar. Information on Document Modes is available on MSDN, as well as on our blog.

Common Keyboard Shortcuts
A list of available keyboard shortcuts for use in the Internet Explorer Platform Preview: