If you have the opinion that the official IE9 Beta still has lots of bugs and incompatibility, a newer and supposedly better version of pre-release IE9 build has been leaked to Internet. IE9 Pre-RC, or rather the IE9 Beta 2 been the second build which been released or leaked to public, has the build version of 9.0.8027.6000. The build has a even newer version number than the Internet Explorer 9 Platform Preview 7 build 9.0.8023.6000 which was released recently.

The IE9 Pre-RC Beta includes new features such as a download speed indicator for the download manager, and fixes some important reliability and compatibility issues, in addition to enhance web page loading speed and general performance. Overall, IE9 Pre-RC is said to improve user experience over IE9 Beta. 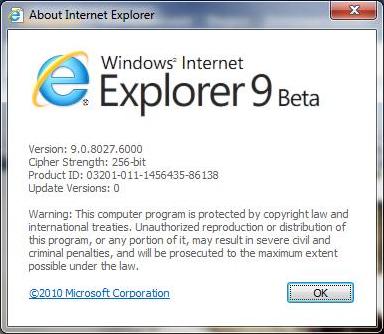 The leaked IE9 Beta v9.0.8027.6000 was the build that been distributed to VIP testers by Microsoft, but not available officially for the general public, except through the leak download. After installed the leaked IE9 Pre-RC, it’s listed as “Windows Internet Explorer 9 Release Candidate” in the Installed Updates of Control Panel.