The Visual Studio 2010 has just been released, but have apparently been cracked or hacked, thanks to the generic master product key that been used by Microsoft to integrate into pre-activated Visual Studio 2010 Ultimate, Premium and Professional setup installers in ISO image formats, which is been released to MSDN subscribers, and some editions to WebsiteSpark, BizSpark and DreamSpark participants.

There are two ways to use the leaked master product key for Visual Studio 2010. 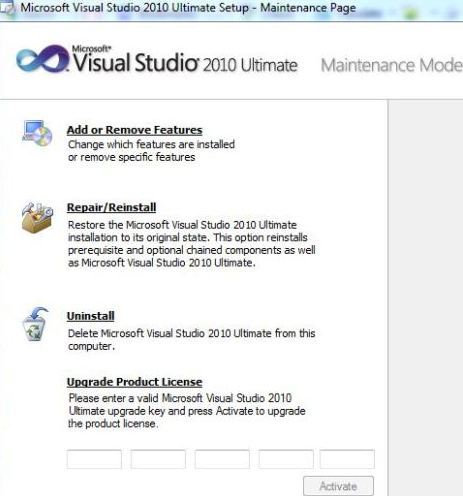 A Visual Studio setup maintenance screen should be shown. After clicking Next button, an option to enter a valid serial number to upgrade product license is available. Enter the upgrade key accordingly, and click on Activate button. No re-installation required. 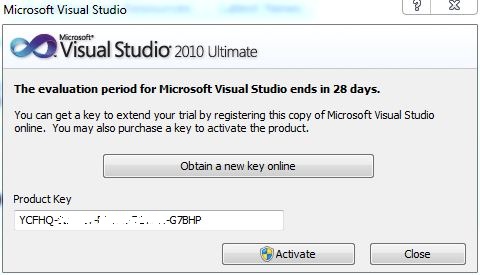 Unpack the downloaded Visual Studio 2010 Trial ISO with WinRAR, and then modify the setup.sdb under the setup folder with any text editor. Locate the [Product Key] heading, and change the line under it to YCFHQ9DWCY***************. Run the setup.exe to start the installation, which automatically enters the serial key into installed app.

The leaked product keys potentially costs Microsoft a huge sum, as Visual Studio Ultimate 2010 costs more than $10,000 for a piece of license. Anyway, Visual Studio 2010, been a development and programming tools, may be of less interest to general public. Anyway, Microsoft has been given away free license to use Visual Studio to selected targeted group through various Spark programs to encourage development in Windows environment.

Note: Product keys been removed due to Demand for Immediate Take Down – Notice of Infringing Activity – MS Ref. 312243 from Internet1@microsoft-antipiracy.com.

Disclaimer: This article is for information and educational purpose only.