Office 2011 for Mac Free Download at TechNet and MSDN

The ecosystem of Microsoft has always been Windows platform, and thus Office for Mac is one of the few rare software application developed by Microsoft for Apple Mac OS X platform. Office for Mac 2011 is the latest version of Office productivity suite for Mac OS X system, which has since been officially released to retail shelves on October 26, 2010. 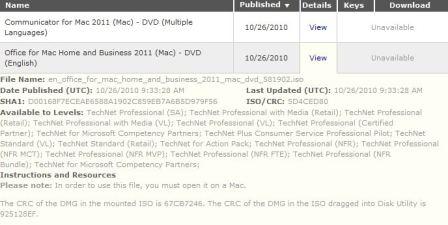 The ISO is a DMG wrapped in an ISO enclosure package, and must be opened and used on a Macintosh system.