Quake 3 Arena HD is ported from iPhone and iPod touch version of Quake 3 Arena along with several bug fixes and improvements including a full all new control system. The game is controlled by a joystick for looking around and multiple keys on the left to move around and perform action. The controls were designed for the best game play experience possible with the iPad. 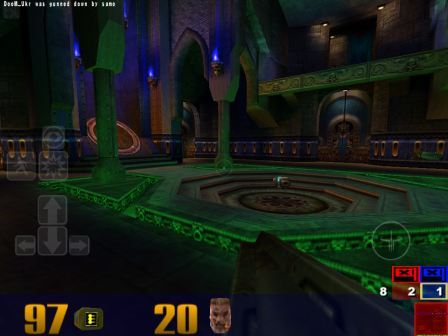 In Quake III Arena HD, players can use the controls of “left top” as “ESC” and “right top” as “Enter”. Players can also set or configure player name, keyboard settings or other preferences by getting the q3config file from iTunes File Sharing, which will be created at first run, and edit accordingly. Gamers can use the highres textures located here for a stunning game experience too.

The iPad must be jailbroken in order to download and install Quake 3 Arena HD. To jailbreak iPad on iOS 3.2.2, uses Limera1n or GreenPois0n.

More information about the release can be found on paduser.com.