Business and financial news readers are now given a free of charge access to the widely established international daily, the Wall Street Journal, via their Apple iPhone. The hundred-year newspaper published by Dow Jones & Company has lately released a free iPhone app which allows iPhone users to read the online content for free. This open-up online content for free reading was earlier released for the Blackberry last August and has now been extended to Apple iPhone.

Wall Street Journal is not the first “branded” newspaper available in Apple iPhone. Apple iPhone users also can find others newspaper such as Bloomberg, CNN, AP, New York Times, etc. Giving the free online content to particular mobile users will definitely broaden the readers’ catchment without necessarily jeopardizing the subscription model on its own online wsj.com site. It can tap on the popularity of Apple iPhone to enlarge its reader group worldwide while getting advertisers to pay and hence reduce its cost substantially. In the long run, this is a win-win strategy for both Wall Street Journal and also the reader. 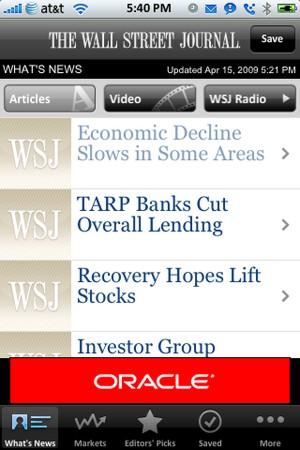