Nowaday, a truly portable mobile phone is not only been used for communication purpose, most people will also use their handsets to play mobile games during free time or when idling. Sony Ericsson has launched PlayStation-certified Sony Ericsson Xperia Play smartphone in order to capture market of gamers. As its name implied, this Android powered smartphone is designed specially for playing game in addition to the usual stuff. On another hand, Apple’s iPhone 4 is also known for its rich App Store that offers tons of fun mobile games. If you’re in consideration of purchasing either one of them as a phone, yet the gaming experience is important to you, check out the following comparative table of Sony Ericsson Xperia Play vs iPhone 4 which details differences of specs and features between both mobile phones. 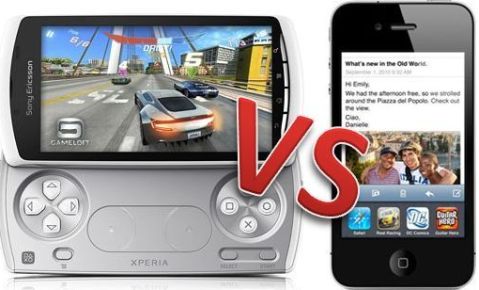 From the table above, you can easily found that iPhone 4 is noticeably slimmer, thinner, smaller and even lighter than Sony Ericsson Xperia Play. For those who prefer stylish design and ultra-compact body will definitely go for iPhone. Actually, the comparison between SE Xperia Play and iPhone is not entirely correct, as similar to all touchscreen mobile phones, all gameplay on iPhone is by using fingers tap. As what you see in the photo, the most attractive selling point of the Xperia Play is its integrated game pad, which is designed specially for the hardcore player who love the traditional gaming control pad very much. It can act as a portable gaming console to deliver an immersive mobile gaming experience. Phone has emerged as one of the top device used for gaming due to great amount of games that available on the iTunes App Store. However, been Android, it also meant the the SE Xperia Play will never lack of growing list of addictive games which are available from Android Market.

Note: Sony Ericsson Xperia PLAY is slated to hit Verizon stores on May 26 for $199.99 on a new 2-year contract, and pre-orders is starting May 19 through Verizon’s official site. And by the way, with next iPhone, rumored to be iPhone 5 or iPhone 4S, slated to release anytime fron June to September, you may want to hold off your plane to buy a iPhone 4 to go for newer iPhone.