TCP-Z is a very useful memory manipulation utility that patch and change TCP/IP simultaneous concurrent half-open incomplete outbound/outgoing connection attempt limit in Windows operating system dynamically. Unlike most TCP/IP half-open limit patchers available on the Internet, TCP-Z does not actually modify and patch the actual tcpip.sys system file. Instead, TCP-Z directly access the kernel memory to set the new value as number of half open connection limit allowed. TCP-Z has some similarity to CrackTcpip.sys (now renamed UnlimitedTcpip.sys) which uses a memory resident driver to modify the connection limit.

TCP-Z, developed by a Chinese named deepxw, has the full project name of TCP-Z Network Monitor, and is also known as TCP Half Open Connection Limited Patcher, is far more superior than and contains all features of most other TCP/IP half-open connection limit patchers such as Event ID 4226 Patcher, EvID4226 Fix, TCP/IP Patch, VistaTCPPatch, Half-Open Limit Fix and etc. It supports patching of tcpip.sys on all versions and editions of 32-bit (x86) and 64-bit (x64) Windows operating system that implements the limit on outgoing incomplete connection attempts, such as Windows XP SP2/SP3, Windows Server 2003 RTM/SP1/SP2, Windows Server 2008 RTM/SP2, Windows Vista RTM/SP1/SP2 and Windows 7 (in actual, Windows Server OS will also has the connection limit parameter, however it’s ignored and not implemented in server).

TCP-Z memory hack works because Windows only loads tcpip.sys into memory on system startup. After that, OS reads the number of incomplete half-open TCP connection limit from the memory, and not from hard disk. TCP-Z takes advantage of this inner working to modify just the TCP connection limit value in memory which can take effect immediately.

In 64-bit (x64) version of Windows Vista or Win7, user must enable TESTSIGNING mode in order for TCP/IP patching to work correctly. To do so, open command prompt as administrator, and run this command:

Restart the computer when done. Above commands just need to run once. However, a “Test Mode” watermark may be placed on desktop, which can be removed.

You may be wondering why in Windows Vista and Windows 7, the maximum value of TCP connection limit can be set is only 255 or 251. This is because the tcpip.sys of Windows Vista and Windows 7 has only 1 byte for the limit, so that maximum value is 0xFF (255). In Windows XP, up to 4 bytes can be configured as the limit, so the maximum connection limit can achieve is 0xFFFFFFFF. 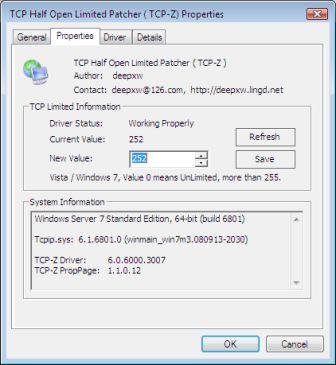 Go to Device Manager to modify and set the parameter value of intended TCP/IP half open connection attempt limit.

Note: Since Windows Vista and Windows Server 2008 SP2, there is no more restriction (now unlimited) concurrent half open TCP/IP connection limit, although the limit remains active at Windows XP.